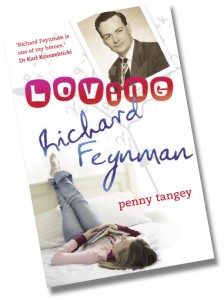 Catherine claims she isn’t your average teenager – after all, she’s not shy about stating her love for science and her abilities in maths. And her favourite pinup poster is of a Nobel Prize winning physicist, Richard Feyman. In fact, she is one of those students who actually chooses to wear her school uniform on a mufti-day! She doesn’t care – or does she?

So begins the story, centring on the school life of 15 year old Catherine, as she negotiates the trials and tribulations of year 10 at Kyneton Secondary College. Written as a daily letter to her scientist hero, Loving Richard Feynman is a clever blend of historic fact and adolescent musings. The facts are about Richard Feynman’s scientific life and the musings are all about friendship, family and managing day-to-day relationships. Catherine uses her writing to Richard to make sense of her experiences, and to think ‘out loud’ about her feelings – even though they are expressed to a dead physicist.

Though the novel focuses on only a few months, it is a critical time for Catherine.  We get a sense that she does have the normal angst and worries of a teenager which most high school students (and those who remember high school) can identify with; things like being socially awkward, being picked on or snubbed by the ‘in’ group, insecurity in your own abilities and dealing with those changing hormones.

How she copes with these things and new friendships is told in an easy-going manner, making this a great story to recommend to a wide audience. (One reveiwer on Penny Tangey’s home page actually said: As a female physicist, I want to urge Physics teachers everywhere to read this book and then lend it to their English teacher colleagues.)

I agree because Loving Richard Feyman does provide a realistic story and an entertaining read, while it has us questioning Catherine’s (and our own) expectations of life in a perfect world.