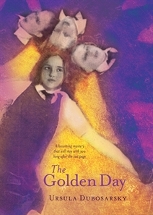 Ursula Dubosarsky’s new book, ‘the Golden Day’, has both echoes of Picnic at Hanging Rock and memories of the sixties in its tale. Maybe that’s why I enjoyed it.

A small class of young girls spend the day with their teacher, Miss Renmark, on a brief excursion to a local park – there to “go out into the beautiful Gardens and think about death”. The tale begins on a normal sort of day, in a girls school – the day that Ronald Ryan was hanged in Melbourne in 1967.

What happens on that day was to haunt the girls, 11 in total, from that day forward. And to remain a mystery, it seemed.

Indeed the tale itself is haunting, told by Dubosarsky from the point of view of young impressionable girls, so that the reader is never really sure of the whole truth behind a mysterious disappearance on that fateful day.

Who is Morgan, the draft dodger poet they meet in the park? And why is Miss Renshaw so entranced by him? Should they trust him as they venture into the hidden caves along the foreshores of Sydney under his guidance? What could they have done differently to avoid the tragic outcome of the day? Would they ever know what really happened?

‘The Golden Day’ is a well-crafted mystery – reflective of true events that happpened around the time it was set – as author Ursula Dubosarksy indicates in a final note, referring to disappearances of Juanita Nielsen, school girl Samantha Knight and another Mossvale school girl murdered in 1962. And as Sonya Hartnett comments on the inner book flap, this tale is one that ‘when its’ gone, you can’t stop thinking about it’.

‘The Golden Day’ has a dreamlike quality, but you still wonder what is the dream and what is meant to be the truth – and vice versa. Read it and see for yourself…