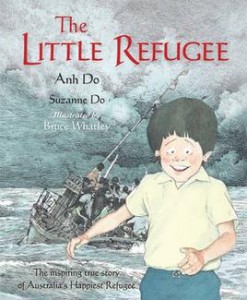 Last weekend, the Australian Independent Booksellers announced the Indie Awards for 2012. as htese awards are decieded by those in the bookselling trade, they are often a good indicator of future success and/or popularity.

The short list was released in late January, and included books like ‘Caleb’s Crossing’, ‘the Street Sweeper’, ‘Five Bells’, ‘Past the Shallows’ and ‘All that I Am’.

Last year Anh Do’s ‘the Happiest Refugee’ won the Book of the Year Award. This year the tale was also in contention, but in its picture book version, ‘The Little Refugee’ – and it won the Children’s Book category!

Other results included ‘Street Sweeper’ by Elliott Perlman – Fiction Book of the Year; ‘All That I Am’ by Anna Funder won the Book of the Year, and ‘Worse Things Happen at Sea: Tales of Life, Love, Family and the Everyday Beauty in Between’ by William McInnes and Sarah Watt has won the Non-fiction category.

Which of these book have you read and enjoyed? Why not also have a look at the whole shortlist for some great recommendations? (You are most welcome to write and send me a reveiw of any book which you particularly enjoy…)