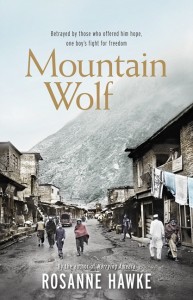 ‘Abdur-Razaq Nadeem felt the rumble in the earth, like a truck rushing underground.’ So begins the events which turn Razaq’s life upside down – an earthquake which wipes out much of his mountain village, including his family.

Set initially in a mountain village in Pakistan, Rosanne Hawke’s book , ‘Mountain Wolf’, reveals the precarious situations of many children following a natural disaster. The loss of his immediate family in the earthquake leaves 14 year old Razaq in the doubtful care of a lonely neighbour, Mrs Daud, who is experiencing her own shock and losses. In her disoriented state, she claims him as her son, then misguidely hands Razaq over to a stranger, who promises to help him find his uncle – in exchange for a paltry sum of money.

Thus, begins a tragic journey of  trading, as Razaq is taken to the city and sold into slavery. At first, he is a virtual slave to a restaurant owner; then from there he is exposed to an even more seedy side of life of child abuse and prostitution. His only hope remains in finding his uncle, who in a parallel story begins a relentless search for Razaq.

Rosanne Hawke writes from the heart. With the experience of participating in aidwork in Pakistan and the United Arab Emirates, her stories are informed and real. The reader can truly imagine the places she describes, and empathise with each of the young, abused children. And the children she portrays are also real. Razaq’s growing understanding of his situation reflects the innocence of many real children who are caught in child slavery; thus, the story opens our eyes to the tragic situation of many children caught in the web of the child trafficking in many places around the world.

In ‘Mountain Wolf’, Rosanne Hawke also successfully blends differing points of view, with muslim Razaq being exposed to the Christian beliefs of Tahira, a girl similarly entrapped and abused. Together, they give each other hope in the most desperate of times, and their friendship is a tiny glimmer of happiness which keeps them going. Their friendship is also Razaq’s Achilles heel, as his captor knows he can control Razaq via Tahira. Meanwhile, the strength of family ties is clear as Uncle Javaid continues to search for Razaq.

‘Mountain Wolf’ is a challenging story, since it exposes a subject matter many would rather not know about. It’s probably a bit uncomfortable and a little too descriptive for younger readers, but the confronting tale tells an important story for a mature reader. (The author acknowledged this at its launch at the 2012 CBCA conference in Adelaide.)  Graciously, Rosanne has donated proceeds from the book to help children whose lives have been traded, and there is a list of resources used by the author that readers might like to follow up. (#I was unable to find out more detail…)

Other books by Rosanne Hawke, such as ‘Marrying Ameera’, are also commended for their gritty realism and the strong determination of her characters. For an understanding about how her writing and her life interests see: http://www.rosannehawke.com/