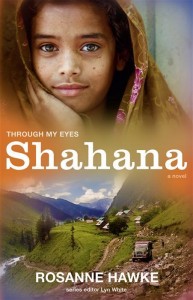 Shahana is the first of several books in a series Through My Eyes, with a focus on children living in conflict zones around the globe.

Life for Shanana is difficult; even more so with the death of her father, mother and older brother – victims of militant fire in the borderlands of Kashmir. With her younger brother, Tanveer, in her grandfather’s mountain village home, she ekes out a living daily by sewing and haggling for their basic necessities.

As if life isn’t hard enough already, when Shahana and her brother come across a half dead boy being attacked by wild dogs, they rescue him. Not only is he another mouth to feed, his Indian family background is in conflict with their heritage in a zone of great political conflict. Add to that the problems of a 13 year old Muslim girl living with an unrelated male in her house, and you begin to understand the complexities in the life of Shahana and her younger brother.

In this tale, Rosanne Hawke cleverly reveals ways in which life unfolds for many young girls like Shahana; when they are orphaned, or their families face the challenges of poverty in a land of war and strife. Each day is a test of survival. Each day also brings the challenges of testing friendships and relationships – determining who one can trust, and which people you should rely on.

Shahana is a strong character, bound however by the traditions of her sex. Many of her decisions are taken in the light of this, as we see her modify her choices because she has to ‘take her place’ and be wary of overstepping her role. However, her fate is to challenge the idea of being submissive – to avoid suffering at the hands of others just because she is orphaned and female.

There is lot to be learned about Shahana’s Kashmiri culture, and the story is sprinkled with the language and traditions of her family and those around her.

Tragically, there is also truth in the fictional lives of the people who populate Shahana’s world:

In many ways, these are the critical elements of the tale – revealing as they do a world apart from our own western experience. A world in which a 13 year old girl has to feed and care for her younger brother, and keep him from the clutches of a greedy businessman. A world in which unknown people are feared, and known people change according to their unfortunate circumstances. A world where a young girl has great responsibilities, beyond her tender years. A world all too common in many parts of the world today.

In this clip, Rosanne Hawke talks about how and why she wrote Shahana, and what she hopes readers take from the story:

Shahana is the first book to be published in this series; with others by renowned authors (including zones of ongoing conflict such as Somalia, Afghanistan and Mexico) to be published soon. For future details see: http://throughmyeyesbooks.com.au/

A portion of the proceeds from the sale of the series will be donated to UNICEF.