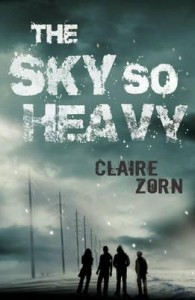 Life has changed dramatically for Fin and his younger brother Max. Their dad has not returned home since he followed Kara, their step-mum, when she fled their house after a disagreement. Their mother is away in the city, looking into what has happened. One day life is normal, the next it is dark and desolate and desperate.

I read ‘The Sky So Heavy’ around the time of experiencing the bushfires in the Blue Mountains, and so readily identified with many aspects of the story:

Fortunately, however, I did not experience the ongoing loss of power and communication which occurs for Fin, Max and their neighbourhood. For them, the trauma lasts much longer and they are forced to seek out food, fuel and other options to keep themselves alive. Also unlike the bushfire experience, their community is not cohesive and caring, since people begin to fight for their own survival, food becomes scarce and knowledge of what is going on around them is limited.

Much of what I liked about the book had to do with its setting; so I spent a lot of time considering where things were taking place, enjoying Zorn’s descriptions, while trying to imagine the mountains community cloaked in a nuclear winter coat.

Her characters also rang true, without being over-the-top in their actions. They behaved in ways that I could accept teenagers under immense pressure might – brave though still children, caring for one another while still wanting care for themselves, strong at times of importance but soft enough to feel for the plight of others. Other readers might ponder if they would act the same in similar circumstances.

‘The Sky So Heavy’ makes you think about many things – including what it might be like to be thrust into nuclear devastation. As we consider what life must be like for those caught up in the ravages of Typhoon Haiyan in the Philippines, it helps us think about what actions we might take to survive a global catastrophe, and what lengths we might go to for family and friends.

One thought on “The Sky So Heavy”