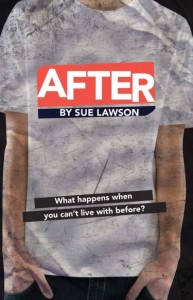 CJ is sent to stay with his grandparents in the countryside. It is in the middle of the school year. He is not happy. Neither are they.

Life in the country is also quite different from the city life he is used to. There’s a lot of different jobs to do on the farm. Many different animals to get used to. And then, there’s a whole lot of new ‘animals’ and other stuff to adapt to at a new school.

The trouble for CJ (Callum) is that the town of Winter Creek knows more about him than he does. Nobody has told him anything about his background. What is worse is that Jack Frewen knows a whole lot more about him than he would like him to know. On top of this, Callum also has aspects about his recent past that he would like to forget – if only his nightmares and daytime flashbacks would allow him.

Sue Lawson has packaged some great characters into ‘After’. Why? Because they are realistic and believable. They could be your best mate, your worst (bullying) enemy, or your long lost grandparent. Look left or right, Jack or Ella or Tim may be one of your schoolmates. Nic or Benny may be much like your best friend. Or least, someone you know at school.

Since Callum strives to be a loner at his new school – private and solitary, it is interesting that along the way, he buddies up with Luke; a ‘special’ boy at school, victim of taunts and teasing. Someone who used to be someone great until….

Callum’s quiet acceptance of all that is dished out to him at school, bubbles under the surface through most of the story, at a time when he is struggling with why his mother has sent him away. He doesn’t dob on those who bully him. He doesn’t want to talk about his past. He doesn’t want to sort things out with his mother or his grandmother. How many of the people you know at school and work might be feeling much the same? [Quietly troubled.]

Events traipse along in ‘After’, loosely connected along a line of sporting and school activities. Favours and favouritism raise their heads, as old alliances are paid out with blind acceptance of the way things just play out in a country town. But Callum’s arrival begins to challenge the old order. And some, like Jack Frewen, aren’t happy about that.

Old hurts, anger, blocked memories and misinterpretations are some of the key things Callum has to deal with – which becomes clear to us as we move between the ‘Before’ and ‘After’ elements of this story.  Little by little, bits of Callum’s past are revealed – many of which are new to Callum himself. When some are revealed in an antagonistic manner, how will he react?

‘After’ is a story of hurt, rejection and reconciliation. A story of contrasts and differences.  A story of acceptance and friendship.

What do you think?