Each year, independent book sellers from around Australia nominate the best Australian books for a calendar year. The shortlists include choices for Fiction, Non-Fiction, Debut and Children’s literature.

As the people on the ground, and those with whom you can discuss your likes and dislikes in reading, their recommendations are valuable and inspiring to their customers. Thus, it is worth looking at this year’s list (announced January 29) and checking off some of the books they have considered for this year’s awards: 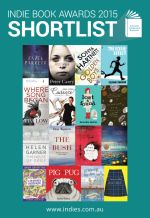 While obviously many of these books are not Young Adult literature, some could be suitable for a mature reader, and they certainly offer some interesting titles for teachers to consider.

The Children’s category is rather broad, and I am sure that there could be an argument for at least 2 sub-categories of this – especially when you compare Pig the Pug (picture book) with Laurinda (352p.).

The awards will be announced on March 25 – how many of these will you read before then?

For more about the awards, visit Indie Awards 2015.