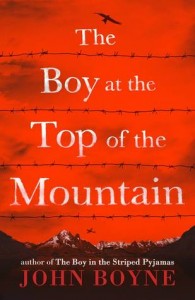 Back in 2006, John Boyne released ‘The Boy in the Striped Pyjamas’ – a tale about a nine-year-old boy growing up during World War II in Berlin. Despite being the son of a Nazi Commandant, Bruno sees the world through the eyes, of a child, which provides an interesting slant on this passage of history.

Once again, Boyne has written a novel set in this time period, and again from a child’s focus – ‘The Boy at the Top of the Mountain’.

This time ‘the boy’, Pierrot, has a mixed heritage, being the son of a French mother and a German father, living initially in Paris. Sadly, this doesn’t remain the case, due to the gradual disintegration of his family:

Although Pierrot Fischer’s father didn’t die in the Great War, his mother Emilie always maintained it was the war that killed him. (opening sentence)

Thus, life changes for Pierrot and he has several relocations and events in a very short time, all set against the background of WWII.

Once again, Boyne’s writing brings the young adult reader some understanding of what life could have been like for young children. It would help to have a knowledge of European geography, as well as what was meant by the Berghof (a home of Hitler), to gain some understanding of the significance in this story – but maybe that’s a challenge for YA readers to reach!

This new tale has similar elements, though it doesn’t feel as complete, but is definitely worth reading as it asks questions of loyalties vs the power of indoctrination. Pierrot faces many choices and changes in his life – some with tragic consequences. No doubt, there will be criticism of some aspects of this story, but its value remains as a way to take a different view of history, and to consider how those, other than the people ‘in power’, were affected by the catastrophic decisions of war – the young, the subservient, those of the ‘wrong’ religion or background.

[For me, this has also been an interesting companion read to ‘All the Light We Cannot See’, another novel set in occupied France during World War II, but at 529 pages of course with a lot more research and detail.]