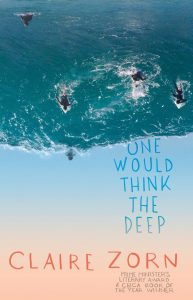 Yet another year of nominations for Claire Zorn – this time for a story (One Would Think the Deep) set in 1997 in a small coastal town, where surfing is a major activity.

Sam once lived in Sydney with his mum, but following her untimely death, he moves north to live with his mother’s estranged sister and her family. Though once family ties were strong, it is hard for Sam to adjust to this different lifestyle and struggles to deal with the changes as he mourns his mum.

In his new ‘home’, Sam’s cousin Minty is idolised as the next surfing champ, and as Sam reconnects with his cousin, he too is introduced to the world of surfing and all its challenges. The highs and lows of Sam’s life are echoed in his attempts to conquer the waves. His friendships also have their highs and lows, with events from the past impacting on his behaviour as he tries to find his way.

Situations in which Sam finds himself make you feel for him as he deals with his losses, but his choices make you want to shake him to his senses. Will he make the most of what he still has? Can he overcome the difficulties he has been dealt? Who will be able to break through to him of he won’t really reveal some of his troublesome thoughts?

This is another authentic story from Zorn, though I think I liked ‘the Protected’ more. Is that simply because of the way Sam made me feel? Is it good that Sam made me react to his choices?

After you have read ‘One Would Think the Deep’, for some interesting reviews from others, visit Inside a Dog. And here is part of a review from the State Library of NSW:

One Would Think the Deep has a potent emotional heart, great characters and beautiful writing. Built around gorgeous evocations of surfing and the sea, it is driven by wonderfully evoked characters and an empathetic exploration of masculinity. Source: http://www.sl.nsw.gov.au/one-would-think-deep-claire-zorn

Now consider if OWTTD gets your vote for the Young Adult CBCA award this year. Comments?