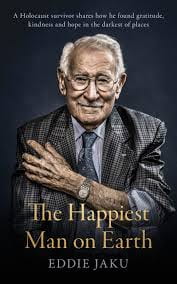 At the fine old age of 99, in May 2019, Eddie Jaku gave a TEDx talk at Sydney’s International Convention Centre. His debut book, ‘The Happiest Man on Earth’, followed in 2020!

As he tells his story, Eddie recollects both the fortunes and misfortunes which have marked his life as a German Jew. Indeed, much of this would be familiar to visitors of Sydney Jewish Museum since he has volunteered at the museum from 1992. It is his story to tell – to remember and honour the missing generations.

Why read another biography of a holocaust survivor? What makes ‘the Happiest Man on Earth’ an important read? In the case of Eddie Jaku – Authenticity. Renown. Optimism.

While Eddie documents the immense struggles of his life (which we may never experience), he also gives life lessons. He recognises the values which shaped him. He values the lessons his parents taught him. He acknowledges the relationships which saved him. And he records, as a survivor, events never to be forgotten – for the sake of those who were exterminated.

While Eddie records tragic events in his life – as a victim of Nazi concentration camps and a refugee caught between two countries, he also inserts the wisdom from a survivor – that which has enabled him to move on from such horror. In ‘the Happiest Man on Earth’, as each period of his life is noted, it is bookended with sage advice to deal with pain, prejudice, problems and the past – ways to be safe and secure in the present. Such advice includes:

# If you have the opportunity today, go home and make sure you tell your mother how much you love her.

# Hate is a disease which may destroy your enemy, but which will destroy you in the process.

These revelations have not come to Eddie easily. Some thoughts were innate from his family’s upbringing, which helped him survive. However, damaged, post-war he was not a happy man, as might be the case for many – until his son was born. He now claims the greatest happiness comes from family.

From someone who has seen 100 years of extremes in human behaviour, Eddie Jaku has much to tell us and ‘the Happiest Man on Earth’ provides many thoughts to ponder. For those who struggle, for those with prejudices, for those who need to forgive or just simply move on.

Life can be beautiful if you make it beautiful.