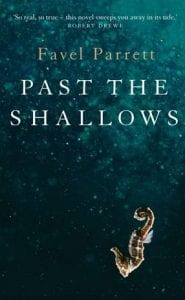 After reading Favel Parrett’s There Was Still Love, I had to find ‘Past the Shallows’ (which I had somehow missed in 2011). This was her debut novel, though she had quite a successful writing career before then.

Just like in ‘There Was Still Love’, the settings and experiences in ‘Past the Shallows’ are beautifully captured, so the visit to the southern region of Bruny Island is well-worth the journey. In fact, the coastal setting and the ocean are significant ‘characters’ within the story.

Three brothers, Joe, Miles and Harry live a troubled existence in this remote location following the tragic death of their mother. Joe has left home and thus, Miles is the one who is commanded to help on his father’s fishing expeditions, while Harry, the youngest is left to his own devices.

For his brothers, the chance to surf is a breakaway from their sad lifestyle, even though the area they surf is tough and unforgiving. Harry, who fears the ocean finds his escape once he discovers Jake and his owner, the reclusive George. Though we might fear a solitary man living in an old rundown cottage, (and maybe Harry should also) George provides a grandfatherly influence in Harry’s life.

As Favel Parrett carefully discloses details about the Curren family’s past, we grieve for their losses and rejoice in the precious snippets of family love they knew. Each of the boys has something to remember, learn from and live through. Is there hope?

Just as their remote location has both grim and beautiful aspects, so too do their lives. There is both joy and sorrow in this tale, with the bond of brothers a strong element. And there will be both laughter and tears as you read this one. 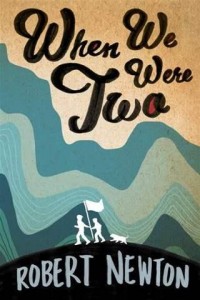 Dan’s had enough and takes off from home – the trouble is Eddie, his younger brother has decided to tag along too. What is he to do? Turn around to take him back? Send him back to a cruel and aggressive father – the one he is fleeing from himself?

Eddie is determined and refuses to go back anyway. So to make tracks , Dan has to encourage the marching activity Eddie loves, put up with his incessant chatter and humour him with stories and imaginings. And thus they march away from their old life in Gunnedah.

Along the road (to the distant Port Macquarie), Dan has to have his wits about him, as they encounter different people with different levels of interest in the pair. Dan is wary of the many of the adults they meet on the road; including one who shows an uncomfortable interest in young Eddie. (Eddie is a little slow following a childhood accident; Dan is hugely protective of him.)

Robert Newton has blended some endearing characters in this tale, and he takes you alongside on their march, with both humorous events and soulful accounts of the boys’ past. Each step they take becomes a triumph, as they overcome lots of hurdles along the way – both physical and mental hurdles, and you really want to cheer them on towards their goal.

Eddie is as delightful, as Daniel is dedicated – a terrific team of two. A group of would-be soldiers also finds Eddie endearing, when the boys join their march over the mountains to join up for the Great War. Together they become an interesting band, as Eddie’s childlike antics brings out the true nature of the men and boys around him, as they all move towards their own goals.

There are many changing moods in ‘When we were two’ – among them are periods of determination, anxiety, confusion, sadness and happiness. Dan and Eddie are searching for their lost mother, on a journey away from the past, towards an unknown future. It is the strength of their brotherly love and dedication that spurs them on, and it is indeed…

N.B. Shortlisted for CBCA Older Readers award. Is this one the winner?