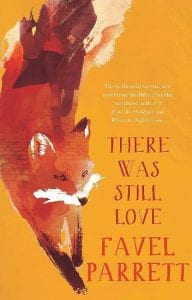 This story oozes feelings and emotions; even in the little things. As you read, you can taste the meals Lucek has with his grandmother. They are deliciously described, even though they may be simple fare. You can also sense the atmosphere of their humble accommodation – a small apartment in Prague.

Told from two main perspectives – that of Lucek in Czechoslovakia under Communist rule, and his cousin, Liska living in Melbourne, it flicks between locations and periods of time as the family links are revealed. Relatives through their grandmothers (twins separated at 17), Lucek and Liska share a precious culture, though they too are separated by half a world.

Many of Lucek’s observations are innocent, but perceptive. His fondness of his grandmother, Babi and his great uncle is strong, even when they behave like grumpy old people. Beautiful moments break through in the story, which makes you want to hug Parrett’s characters. You laugh and cry at their playful antics, and feel their sorrow when things go awry.

Similarly, though Liska lives in a free country, her family lives simply. They save from her grandfather’s meagre wage so they can visit their homeland. Though they live in a relatively free country, they are not always treated well, and in 1980 suffer from prejudice and homesickness.

The home visits to Prague are joyful occasions for sisters, Eva and Mana (Babi), while Lucek ponders why he and Babi don’t have the same freedom to make a visit to Melbourne. He is also puzzled why his mother, Alena, continues to travel outside Czechoslovakia with the Prague Black Theatre troupe, leaving him in his grandmother’s care.

In an interview last year, author Favell Parrett revealed her book was inspired by a jar of gherkins! One she found in a Melbourne deli, which was the exact brand of gherkins her grandmother used to buy. The memories it sparked sent her on a journey to delve into her past to honour her immigrant family, and especially grandmothers. (Part of this novel was originally published as a short story – giving the flavour of the story here.)

Parrett encourages anyone with grandparents or older relatives to talk to them. “Because when they’re gone, those stories are just dust. And that’s what makes up a life really – what did you want to be when you were young, when did your heart first break, who was your first love.” From: An ode to the women who carry our world on their shoulders

‘There Was Still Love’ moves between different times as the family story evolves, and between Lucek and Liska as storytellers, so while I have read this story as an audiobook, I am keen to do a re-read with a physical book. (It’s so much easier to follow the changes in a physical book, don’t you think?) Also, I am late to discover the writing of Favell Parrett but ‘Past the Shallows’ will definitely be my next read.

# Can you describe your grandparents’ home? What does it feel like?

## What is your favourite family memory?

### How often are you able to chat with the older generations of your family or neighbours?