“A tell is a sign a person gives out, accidentally, when they are trying really hard to keep something a secret, and I just happen to be an expert… 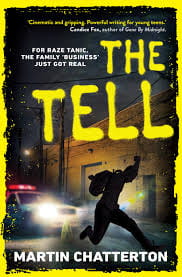 Rey (Raze to his friends) has a few other instincts which he can’t really explain – although he thinks it may have something to do with his family heritage as the son of mafia boss. He has something to tell his father when he next visits him in prison – but what is it?

When he gets an (unscheduled) visit sooner than he expected, Raze is unsettled by his father’s behaviour – even after he raises his issue.

Rey struggles with the wealth and trappings which are the proceeds of the family business (fine possessions, mansion home and attendance at a private school), and does NOT want to follow in his father’s dark footsteps. While a lot has been hidden to him in the past, Rey uncovers many grim details as he gets older.

‘The Tell’ raises questions about family heritage – are we destined to repeat the actions of our parents? Is it in Rey’s genes to follow the violent family business, like his older brother, Solo? At times, his moods and actions make him think so. And what can a kid do to make a difference?

I see my face in deep shadow, eyes glittering like diamonds, the resemblance to my father never stronger. (Rey angered by abuse Candy has faced.)

Candy. Ids. The best part of Rey’s existence is spent with these friends, making street art in the inner city of Sydney – friends with their own struggles. Each of them is somewhat alone with these, but will they share and find support together? Have a peek at this trailer to get a feel for ‘The Tell’:

In ‘The Tell’, Martin Chatterton tosses Rey around in some wild and threatening situations – in jail, followed by criminal thugs, and even hiding in a police officer’s attic (unknown to him). It is action-packed, exposing the dark underworld Rey hopes to escape. The reflections of his father Rey finds within himself make us ponder how it will all end – like father like son? or can he break the mould?