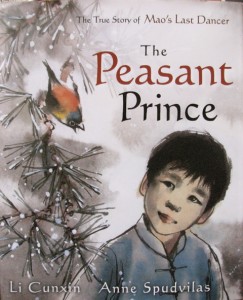 Anne Spudvilas is the illustrator of ‘the Peasant Prince’ – the picture book derived from ‘Mao’s Last Dancer’ by Li Cunxin. At the recent Children’s Literature Festival, at Norman Lindsay’s Gallery (on March 20 and 21 2010), she described the journey she undertook to create this book with Li Cunxin.

The first task was to reduce a story, which was first published as an autobiography covering 450 pages…

“During a holiday at Lorne, in Victoria, soon after he stopped dancing, a friend, Graeme Base, the children’s author and illustrator, persuaded him (Li Cunxin) to list the big turning points he had experienced. This 10-page “general sketch of my life” led to a deal with Penguin. Two years later, helped by two editors, he had expanded the sketch to 680,000 words, then cut them down to 160,000 covering 450 pages.”

For a picture book, this needed to be reduced further – to less than 40 pages! Quite a task! How do you do something like that?

Anne described the process she often follows as:

To create ‘the Peasant Prince’, Anne was fortunate to be able to travel to China for 3 ½ weeks, and be with Li Cunxin on one of his speaking tours. She was therefore able to see some of the places and indeed, meet some of the people he wrote about in his autobiography, firsthand. She was also given access to family photos and memorabilia which she used to bring a realistic feel to the book.

To contrast, Li’s poor beginnings in China, Anne used a low colour palette, including the use of found old newspapers illustrating the meagre inside of his family home. For Li’s life in the United States as a principal dancer with the Houston Ballet, she used vibrant richer colours in layers of oil paints and glazes. And the shine on his parents’ faces in the audience scene is glowing in the final pages to represent their great pride in the achievements of their son.

The journey of the illustrator is an interesting tale – a tale about revealing a tale – and the steps along the way are always exciting as they unfold. They are unique for each special book like ‘the Peasant Prince’ and inspiring to hear about. Thank you, Anne.

N.B. Recent titles illustrated by Anne Spudvilas (with links to her website) include: