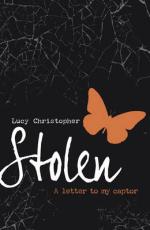 Was Gemma abducted or saved? It all depends on your point of view. Ty thinks he has saved her from the evils and troubled relationships of modern society by drugging her and taking her off thto the wilds of the Australian desert. Gemma, on the other hand, is traumatised and terrified, as she struggles to comprehend her situation and to find a way back home, after being kidnapped from Bangkok airport.

‘Stolen’, nominated for the CBCA Book Awards this year, is a debut novel for its author, Lucy Christopher. It will grip you from beginning to end. Written from the perspective of teenaged Gemma, the story is told as she recounts her journey to her captor – Ty, a complex young man who has been stalking her for many years. It is a well paced tale which you will find hard to put down, though one that will also get you thinking and trying to predicting the ending.

Throughout the novel, there is much to be learnt about life in outback Australia, as Gemma details the intricate planning Ty has completed to prepare for her stay. Little by little, his bushcraft is revealed, as well as the dangers to be faced in the harsh environment to which he has taken them both. While Gemma learns from Ty, she comes to know more about him, though it takes a long time as she wrestles with what has happened to her life.

We begin to know each of the characters more fully, as Gemma writes to her captor, vividly describing her feelings and the extreme situation she finds herself in. There are many questions to ponder as the story unfolds. Will Gemma escape? Will Ty let her go? Or will they develop the close friendship that Ty hopes for?

‘Stolen’ has already received lots of acclaim – with many positive reviews at: the author’s website and LibraryThing, among others. What did you think of ‘Stolen’? and where does it stand among the CBCA Shortlisted books for 2010?