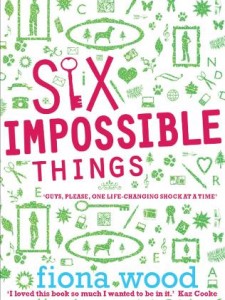 ” ‘ We have a new student starting today. Are you here…’ he consults a note, ‘ Dan Cereal?’

Some snigger at the name.

He touches his tongue to the trim under-edge of this moustache and sizes me up. Am I a troublemaker? Am I ridiculing him? He can’t decide.

Thus begins Daniel’s first day at a new school. No longer at a private school, no longer amongst his friends, and no longer in a home with two loving parents. Now, his mum struggles to makes end meet – by making wedding cakes, and his dad lives elsewhere, since announcing his status as a gay man. Daniel plans to lay low and not draw attention to himself at his new school – a hard task for someone as bright as he is (nerd-boy), and one who is immediately targetted by one of the school bullies.

Dan’s a likeable and believeable character, reflecting many of the torments faced by teenagers adapting to change in their lives and in the first throes of love. Estelle is the one positive he finds when he and his mother move to her great-aunt Adelaide’s house (a smelly abode bequested in her will) – she lives next-door and he has an impossible crush on her from the very first sighting.

Author Fiona Wood has added some interesting elements to Dan’s story – an ‘attic connection’ crucial to the unwinding of the story; an inherited but soulful dog (or is he an intuitive guardian angel?); along with peripheral characters who come to the rescue at just the right moments. Thus, she has artfully placed historic momentos, gifts from the past and even plants and animals in the right locations and times in Dan’s new life. But not always…

There are of course, times when he goes from one embarrassing moment straight to another. Times when he simply can’t understand the way his mother is functioning (or not), and times when he really needs to scream at his father (though he hasn’t spoken to him since he left). Throughout, Dan updates his list of six impossible things. He’s quite perceptive for a 14 year old boy – but he doesn’t get everything right – or does he?

“Dan Cereill is an odd sock and an absolute sweetheart.” Simmone Howell

To read more about the book from the author herself, go to: http://fionawood.com/books

What do you think of Dan and how he copes with the teen years at a new school?