I found myself enjoying the challenges of ‘Prized 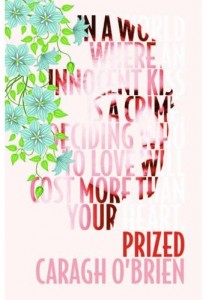 ‘ before realizing it was the second book of a series. Can I say, it wasn’t a problem to read alone, though I will probably venture back to ‘Birthmarked’ at some stage…

‘Prized’ opens with a young girl, Gaia, struggling across the desert with her baby sister bundled close to her. The baby is close to death when the are ‘rescued’ and taken to a gated community on horseback. In the days to follow, though Gaia and her sister recover, their lives are changed completely as they are separated and come under the laws of the land.

Gaia has to submit to the dystopian order of Sylum, where the minority female community rule, and baby girls are highly prized. Her skills as a midwife are valued, in many different ways, and she challenges the rules of the society with some dire consequences for herself and others.

Will she finally submit to the autocratic control of Matrarc Olivia, as she lives under her close and demanding supervision? Can she adapt to the harsh social rules and regulations in a society where a kiss can have tragic implications?

‘Prized’ brought forward some interesting ideas – some, like the ruling (female) class being the smaller portion of the society, were a bit curious, I thought. But I gave in to the laws of Sylum, accepting the way things were much more than Gaia ever would, because I was captured by the tale Caragh O’Brien tells.

For more on the series, see: http://www.caraghobrien.com/book/birthmarked/