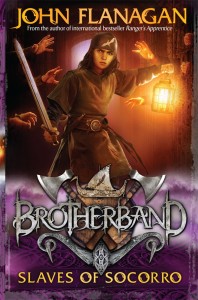 Right from the beginning, I have to confess that I haven’t read the previous books in John Flanagan’s Brotherband series. However, this hasn’t impacted on my recent enjoyment of ‘Slaves of Socorro’ – no. 4 in the series.

After the introductory comments, explaining sailing terms, the tale begins with the fun and frolics of the seafaring community of Skandia. Bjarni is anxious about his boat rebuild, Hal is anxious about his recognition as a master boat builder and Lydia is seeking a way to flee an aspiring lover. Thus, some of the Heron Brotherband are reintroduced and the scene is set for future adventures.

Fortunately, John Flanagan’s storytelling ability enabled me to understand not only the concept of the Brotherband, but also to understand some of the quirks and talents of Hal and his intrepid crew. In this, the fourth of the series, their ship (Heron) becomes the Skandian duty ship to the Kingdom of Araluen – a ship at the disposal of King Duncan ready to move people and things quickly if necessary.

Fans of the Ranger’s Apprentice will appreciate the time and the world in which the Brotherband books are set, though these adventures take place in seafaring communities.  Flanagan brings a mixture of characters to this series, and Slaves refers seamlessly back to events from the past books, without sounding like he’s on repeat. Indeed, there is also a Ranger who joins Hal’s crew to fight a common foe.

There are many likable characters in Brotherband and plenty of action for them take on. In the video below, John Flanagan talks about some of his ‘Brotherband’ characters:

If you are already a fan of the Ranger’s Apprentice series, then you would definitely enjoy the Brotherband series – just ask the author! (This is but one of the comments he makes in  SIX THINGS YOU SHOULD KNOW ABOUT BROTHERBAND.)

If you are like me, and yet to catch up with the previous books in the series, they are: the Outcasts, the Invaders and the Hunters – and all 4 books including Slaves of Socorro are available in our library.

For those who are already fans, Brotherband no.5 Scorpion Mountain is due out in November!