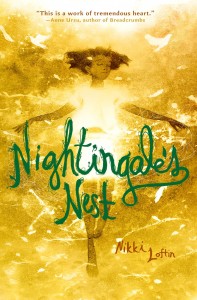 Life is not easy for ‘Little John’. His little sister is dead, his mother is in mourning, while his dad drinks away the money which is meant to pay their rent. Feeling mistakenly responsible for Raelyn’s death, John works hard by his father’s side in his tree-felling business during the summer.

While at a job for a wealthy community member, Mr King, John discovers Gayle – a young girl, perched in a tree on the property, who brings forth a beautiful birdsong. Gayle has also been noticed by the property owner, Mr King, who conspires a deal with John to get her to sing to him – so that he can ‘capture her voice’.

Tragically, Gayle is a foster child in a spiteful family – they have even renamed her, and so ‘Little John’ is drawn to protect her. At the same time, John is tempted by the offer from Mr King (to encourage Gayle to ‘sing for him’).

The struggles faced by both the children and adults in the story are realistic and thought-provoking. There are many decisions John needs to make – with sometimes conflicting outcomes.

Mixed in with this, is the mystery of Gayle’s songbird qualities – and her tale of longing to remain in her ‘nest’ for when her parents return for her. Ultimately, after she is left to sing for Mr King, Gayle loses her songbird skills, and we are left to ponder what happened. Further tragedy occurs, and John has to consider the outcomes of some of the choices he has made over the summer.