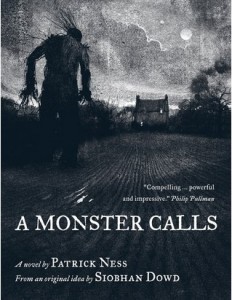 Conor is facing a monster – it looms high above him and takes on the shape of the old yew tree – except it is in his bedroom. And it leaves evidence from its visit – like poisonous red yew berries strewn across his bedroom floor. This nightmare has been visiting him, ever since his mother started her treatment.

Life is troubled for Conor. At school, he is targeted by bullies; at home, his interfering grandmother has come to stay; and now, he feels distant from others he used to be friends with. His mother is also distant as she battles illness, even though she puts on a brave face.

Then all of a sudden, everyone wants to ‘have a little talk’:

‘A Monster Calls’ came about when Patrick Ness was asked to complete a story which orginated with another author. Unfortunately, Siobhan Dowd* tragically succumbed to illness before her characters and ideas came together fully in her novel. As stated in the preface, Ness was at first hesitant to write the story, but thankfully, was able to take a hold of her ideas which:

…were suggesting new ones to me …(so that)… I began to feel the itch that every writer longs for: the itch to start getting words down, the itch to tell a story.

(Then) along the way, I had only one guideline: to write a book I think Siobhan would have liked. Patrick Ness.

‘A Monster Calls’ has recently been released as a movie, which may not be for the faint-hearted as this clip may suggest:

‘A Monster Calls’ works on many levels as Conor struggles to cope with all that life is dealing him.

As a fantasy novel, it is a little different from his previous dystopian ‘Chaos Walking’ trilogy. It challenges your feelings, questions the way people sometimes act, by presenting everyday events that you can relate to. Nightmares, real or imagined, face us all at times – emotions may ride high as a result.

Look around – what are your monsters, and how do you tackle them?

Do you think Siobhan Dowd would like the story Patrick Ness developed from her ideas?