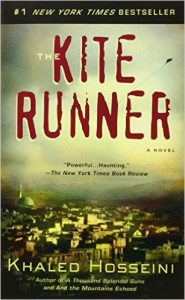 Two boys, two families, together from ‘babyhood’, but with differing destinies. That is the foundation of ‘the Kite Runner’.

Set initially in Afghanistan in the 1970’s, it is a tale of friendship, loyalty, betrayal, prejudice and forgiveness. With this background of economic crisis, political instability and the uprising of the guerrilla opposition forces, the mujahidin (“Islamic warriors”), life is extremely challenging.

For Amir, the son of a wealthy well-respected businessman (Baba), life should have been almost carefree. But without his mother (who died in childbirth), Amir struggles to gain his father’s love and attention. Blessed with a playmate, Hassan, he is, however, able to enjoy some childhood joy.

Hassan lives with his father, Ali, who works as a servant to Amir’s father. Though Baba and Ali have also been friends since childhood, their status in Afghanistan is defined by their heritage; thus Ali and Hassan, scorned upon as Hazaras, are fortunate to work for Baba.

As a young child, Amir has the undying loyalty of Hassan. In contrast, Amir finds it hard to defend Hassan when he faces the taunts and attacks that come his way from the local Muslim bullies. He also struggles to meet his father’s ideal of a son, except for one particular occasion – and even then, he ultimately fails in another respect.

Having been born in Kabul himself, Hosseini was the child of middle-class parents like Amir. His family, too, left Afghanistan when he was young and were unable to return due to the Soviet invasion in 1979. They sought political asylum in the United States.

Therefore, it seems like much of the Kite Runner is autobiographical, as it certainly provides a thought-provoking story of life in a battle-torn country. Hosseini provides snippets of information about how another country faces clashes of culture and ingrained beliefs and the impact on the lives of children and their families. He pulls no punches in describing some of the dire situations in which a ‘less significant’ person might find themselves in an age of economic struggle and political turmoil.

Amir’s conscience encourages us to hope that not all mankind believes in these class structures, though his inaction is constantly frustrating. After a surprising act from Amir, the families are separated and then external factors force Amir and Baba to flee the country, and they get a taste of the life of the less-privileged as political refugees.

Throughout the story, Amir reflects on the importance of family and traditions, and the rich cultural Afghan heritage is peppered within this. The atrocities of war and violence are also a strong feature which makes some parts challenging, trying to understand how such things can happen. In spite of these dangers, Amir is ultimately compelled to return to Kabul – to seek peace, redemption and more.

the Kite Runner – book to movie

‘The Kite Runner’ was actually a debut novel for author Khaled Hosseini, and the author states that “if I were given a red pen now and I went back … I’d take that thing apart”. However, it has received many many accolades (and sales) since it was first published in 2003.

(Khaled Hosseini: ‘If I could go back now, I’d take The Kite Runner apart’ from: https://www.theguardian.com/books/2013/jun/01/khaled-hosseini-kite-runner-interview)

# I’m not sure I really liked Amir, even at the end of the novel: do we have to allow him forgiveness for his actions? is there a better ‘hero’ in the story?

## I have not seen the film version and wonder if it gave an even glossier finish to the tale?