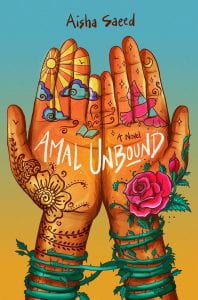 Life is precarious for many girls around the world – and education is not always freely available. For Pakistani girl Amal, school has been a wonderful privilege which she was lapping up, until things go frightfully wrong – her plans study to be a teacher in ruins.

Amal Unbound echoes some of the realities for many girls around the world:

Amal also echoes the bravery and strengths of girls like Malala Yousafzai, whose desire for girls’ education lead to her being shot at point-blank range in 2012 by Taliban extremists. Like Malala, Amal yearns to better her position in life beyond accepting a traditional subservient female role. When things go awry for her, this desire becomes even more heightened – but what can a young girl do?

Aisha Saeed is a Pakistani-American writer, teacher, and attorney. She is one of the creators of the #WeNeedDiverseBooks social media campaign. Her book, Amal Unbound, raises the issues of inequalities and indentured servitude (i.e. slavery for debt) which affects millions of people worldwide. It also recognises the need to be brave and take a stance against this – like Malala, and those who support the Malala Fund.

In most cases, education is a vital key, worldwide. For those caught in the tragic circumstances poverty sometimes deals them, it helps them strive for more; and for those in privileged positions, education aids understanding of the difficulties faced by many, and invites us to support ways to break down the barriers that hold girls back.

As Aisha Saeed states in her notes, Amal is relatively lucky in her servitude conditions – others suffer far worse. However, her loss of family life is her cruelest punishment, with lots for YA readers to consider. It would be interesting to know if the author plans a follow-up story…

For more detail about how she wrote the story, and why, read this interview – Q&A with Aisha Saeed.

This book is about resistance and about not giving up. That’s a message that a lot of people are connecting to as well. – Aisha Saeed.

We learn a bit about Pakistani culture from Amal Unbound. Was there anything which surprised you?

Did the beautiful cover portray the contents?