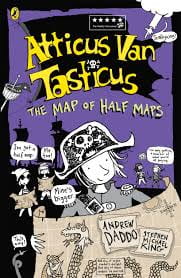 There was a clear indication at the end of the last book that there would be more adventures for Atticus – are you ready to follow?

In ‘The Map of Half Maps’ Atticus and his motley crew continue their journey in search of treasure – “with a new map and a new plan…” and lots of comradery along the way.

The misfit crew make you wonder how their ship could actually function, but there’s a lot of fun in that too. Let your mind drift away on the high seas as they sail about trying to find their way to treasure.

The dangers they face on the sea are unknown. The perils they may meet are scary – who should they fear most, the Vikings or the crew of Pegasis? What battles will they have to overcome?

Once again, there are many interesting additions to the story. These include inventions such as Atticus’ way to communicate to the crew (his version of morse code), and the illustrative skills of Buttface (which enables the capture of a map – from a deadman…). 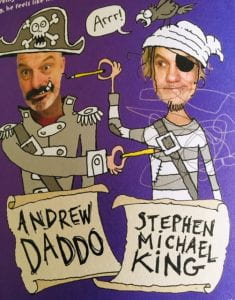 Author & illustrator – Source: the inside cover of Book 2

Throughout, the comical illustrations of Stephen Michael King continue to boost the fun in the story – as do the adventures of Stowaway Puppy. (Have you been watching these? will he make an impact in the story?)

Also throughout the story are the developing relationships of the crew, as they come to know and appreciate one another’s talents and foibles. (What’s it like to have a twin sister? Does Wrong Way Warren actually have the right way of looking at things?)

There are also some fun introductions like the Viking group of Bjorn, Benny, Agnes and Anna-Firdi (ring a bell?). Will they be able to continue to sing together if Atticus defeats Bjorn Ironhead? And there are so many other questions to be answered:

Once again, recommended sharing with the family. And readers 9+ (who will want to share with their family).